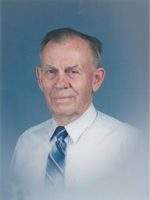 William Thomas Robinson, 92, died Wednesday, February 16, 2018. He was born in Boyle County on July 1, 1925 to the late Joseph and Pearl Goode Robinson. William served in the United States Army, and was a WWII Veteran receiving a bronze star. He was a security guard at Boyle County High School for 38 years, and drove a school bus at Danville Independent School District for 25 years. William enjoyed gardening and was a self-employed painter. He attended Danville First Church of God. In addition to his parents, he is predeceased by five brothers and four sisters.

The funeral service will be 11am, Tuesday, February 20, 2018 at Stith Funeral Home, Junction City. Officiated by Rev. Kurt Herrington. Pallbearers will be Jacob High, Jeremy Grubbs, Jordan Grubbs, Scott Preston, Dale Taylor and Tony Shearer. Honorary pallbearers will be Edward Robinson, Walter Shearer and Dennis Jackson. Interment will be in Danville Memorial Gardens. Visitation will be 5pm-8pm, Monday, February 19, 2018 at the funeral home in Junction City. Memorial donations are suggested to Heritage Hospice.