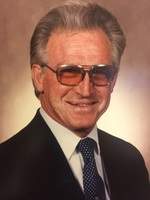 Rev. Victor John Gehlhausen, Sr., age 89 of Stanford, passed away Sunday, January 1, 2017 at his residence. Born Monday, December 19, 1927 in St. Anthony, Indiana, he was the son of the late Louis Anthony & Rose Pauleen Stetter Gehlhausen. Victor was a self-employed house builder for many years and a member of Calvary Hill Baptist Church.

In lieu of flowers, Memorial Contributions suggested to Gideon Bibles.