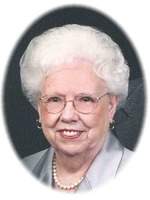 Born on April 11, 1921 in Oneida, Tenn., she was the daughter of the late William Ezra and Amanda Keaton Duncan. She married her late husband, James D. "J.D." Ross in 1939. Veda, a long time member of First Baptist Church, was active in the Dorcas Sunday School class and sang in the choir. She was a homemaker and loved cooking for her family, crocheting and embroidery and creating needlework projects.

The funeral service will be at 1 p.m. Wednesday, July 18, 2012, at Stith Funeral Home, Danville. The Rev. Dr. Tim Mathis and the Rev. Albert Gisler will officiate. Burial will be in Danville Memorial Gardens.