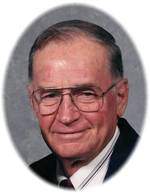 Thomas Richard Walker, 82, of Danville died Thursday, April 23, 2015. Born February 9, 1933 in Boyle Co., Ky., he was the son of the late Henry Thomas and Frieda Feistritzer Walker. He is a 1951 graduate of Junction City High School and a 1958 graduate of Ohio Mechanics Institute. Tommy owned Walker Construction Co and was a partner in Walker Lumber Co. He was a member of Ss. Peter and Paul Catholic Church, served in the US. Air Force from 1952 to 1956 and was a member of the American Legion Boyle Post # 49. Tommy loved to fish, listen and play Bluegrass music and attend Bluegrass music festivals. He was also a woodworker and shared his talents with many people. He was predeceased by two brothers, Frank (Mona) and David Walker.