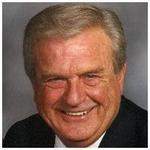 DANVILLE - Talmadge Everman, age 70, of Chrisman Lane, passed away on Wednesday, June 30, 2010, at his residence after a short illness.
Born Friday, March 1, 1940, in Ashland, KY, he was a son of the late Venice Powers Everman and Vesta Opal Porter Everman. Talmadge was a 1958 Ashland High School Graduate and a 1963 Graduate of EKU. He then joined the US Air Force from 1964-1969 where he served as a flight instructor. After serving in the Air Force, he began a 31 year career as a Captain for Delta Airlines. He enjoyed horses, aviation, ATV riding, bowling, and he was an avid UK fan.
Survivors include his wife, whom he wed on August 11, 1962, Betty Bruce Gilson Everman; son, David (wife, Betsy) Everman; daughter, Becky (husband, Will) Selby; brothers, Bronson and Darwin Everman; and four wonderful grandchildren, Hagan and Hunter Selby and Holly and Nicole Everman.
He was preceded in death by his parents and his sister, Doris Everman Schulte.
Funeral services will be held at 1:00 PM Wednesday, July 7, 2010, at First Christian Church with Dr. Jerry Shepard officiating. Burial will follow in Danville Memorial Gardens with military honors by Caswell-Saufley American Legion Post #18. Visitation will be from 5-8 PM Tuesday, July 6, 2010, at Preston-Pruitt Funeral Home and on Wednesday after 12 Noon at the Church.
In lieu of flowers, memorial contributions are suggested to Heritage Hospice.