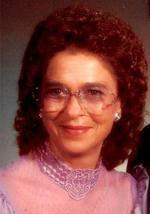 Sue Ella Badgett Gehlhausen, age 84, of Darst Street in Stanford, passed peacefully Sunday, January 18, 2015 at her residence. Born Tuesday, September 2, 1930 in Lincoln County, she was the daughter of the late Thomas Franklin "Tom" & Lelia Grace McClanahan Dishon Badgett. Her loving husband is Rev. Victor J. Gehlhausen, Sr. of Stanford, whom she married September 26, 1947. Sue Ella was a homemaker and member of Calvary Hill Baptist Church. She will be remembered for the love of her husband, children, and grandchildren.

In addition to her parents, she was preceded in death by one daughter, Monica Esther Whited; and three brothers, Dr. Joseph Chester Badgett, Thomas Faulkner Badgett, and William Wesley Badgett.