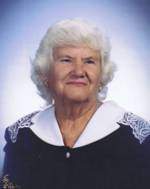 Sibyl Anna Ruth "Mom" Conley, 88, passed away Tuesday, April 9, 2013 at Christian Care Center in Lancaster, KY. She was born October 29, 1924 in Salyersville, KY to the late Hobert and Hattie Adams Caudill. She was the widow of the late Melvin Conley; she was a farmer and realtor for over 40 years, and a member of Willow Grove Baptist Church.


Visitation will be Thursday, April 11, 2013 from 5-9pm. Funeral service will be Friday, April 12, 2013 at 11am with Reverend Johnny Thompson and Reverend Jerry Browning. Both services will be held at Spurlin Funeral Home Chapel (Stanford). Burial will be at Danville Memorial Gardens in Danville, KY. Casket bearers will be: Frank Rhodus, John Rhodus Jr., Michael Rhodus, Willie Baker, Anthony Conley, Billy Caudill, and Hunter Conley.