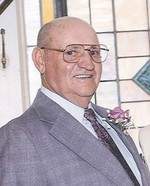 Mr. Roy L. Gibson, 88, husband of Sixty Nine Years to Orene Wilcher Gibson, died Friday, August 11th, 2017 at the University of Kentucky Good Samaritan Hospital in Lexington. Born November 26, 1928 in Mercer County, he was the son of the late Marvin L. and Edna Powell Gibson. He was retired from Con Gibson Paving and McGlone Construction, was a member of the Antioch United Methodist Church, and was also a member of the Bluegrass Horse Pulling Association and Southern Draft Horse Pulling Association.

He was preceded in death by one granddaughter Stacie Lee Meredith and one brother William H. (Wilma) Gibson.

No Visitation will be held. Alexander & Royalty Funeral Home in Harrodsburg is in charge of arrangements.