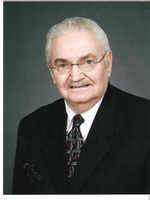 Ralph Cummins, 77, of Danville, died Sunday, Oct. 16, 2011. Born Jan. 29, 1934, in Perryville, he was the son of Henry Milton and Rena Anderson Cummins. He was retired from Modine Manufacturing in Harrodsburg. Ralph graduated from Perryville High School in 1952 and served in the U.S. Army for two years and the Air Force for four years. He loved the U.K. Wildcats and the St. Louis Cardinals and played baseball himself for many years. He was a member of Calvary Baptist Church.Survivors include his wife of 50 years, Jean Montgomery Cummins. They were married on Oct. 14, 1961. Additional survivors are his many nieces and nephews. Ralph was predeceased by his brothers, Walter and Roy, his twin; and sisters, Dorothy Portier, Lorene Hundley, Ruby Yankey, Clara Brown Duncan and Anna Pearl Rose.The funeral service will be 1 p.m. Thursday at Calvary Baptist Church. The Rev. Ernest Martin and the Rev. Brent Rowe will officiate. Burial will be in Danville Memorial Gardens. Visitation will be after 4 p.m. Wednesday at Stith Funeral Home and after 10 a.m. Thursday at Calvary Baptist Church. Memorials are suggested to Calvary Baptist Church Building Fund, Gideon's International or Danville Christian Academy.