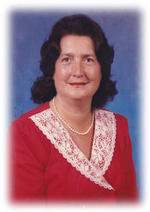 Born February 5, 1940 in Mercer County, Patricia was a daughter of the late James W and Melinda Broughton Mitchell.

Patricia was preceded in death by her parents, a son in law, David Robinson, three brothers, Jerry, Larry and Robert Mitchell and a step son, Mark Wilder

Honorary Pallbearers will be Bradley Stratton and Andrew Mitchell.

Expressions of sympathy are suggested to Heritage Hospice and the American Cancer Society.