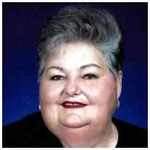 She was born on September 27, 1943 to the late Leroy and Beulah Loraine Johnson.

She was a former employee of Ephraim McDowell Hospital. She later worked at Kentucky State Hospital. At it's closing, she became a Budget Analyst for the Commonwealth of Kentucky with 30 years of public service.

Funeral services will be held at 3:00PM on Saturday November 12, 2011, at Preston-Pruitt Funeral Home with Scott Vifquain and Bryan Gibson officiating. Visitation will be held from 12:00 PM until service time on Saturday. A private family burial will follow at a future time.