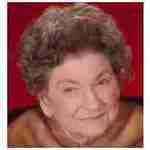 DANVILLE-Mary Osa Gordon, age 87, of Danville, passed away Sunday, January 22, 2012 at the Danville Center for Health and Rehabilitation. She was born November 29, 1925, in Junction City to the late Samuel Lumby and Ethel Faye Nevius Gordon. Miss Gordon was a member of Gethsemane Baptist Church, was a former Sunday school teacher, enjoyed collecting, especially antiques, and was a second mother to her younger brothers and sisters.
She is survived by a brother, Alvin C. (Pat) Gordon of Bardstown, three sisters, Ruth (Richard) Cook, Frances Montgomery, of Danville, and Ethel (Raymond) Payne of Shepardsville.In addition to her parents, she was preceded in death by two brothers, Estill and Bob Gordon and two sisters, Erbie Lucille Gordon and Hazel Fuell.
Funeral service will be 1:00 PM Wednesday, January 25, 2012 at Preston Pruitt Funeral Home with Hospice Chaplain Gary Story officiating. Burial will follow in Danville Memorial Gardens. Visitation will begin at 6:00 - 8:00 PM Tuesday at the funeral home.