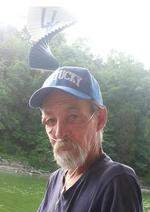 He was an avid Kentucky Wildcat fan. He loved fishing and spending time on his houseboat with family and friends.