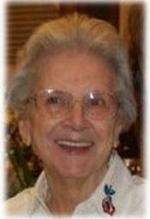 Jeanette Rogers Stagner, 83 of Perryville died Wednesday, December 4, 2013. She was the wife of Donald Stagner.

Born March 23, 1930 in Boyle County, she was a daughter of the late Jesse and Willie Blacketer Rogers.

Jeanette was a retired employee of Palm Beach Company where she worked for twenty plus years and she was a Baptist Church member.

Jeanette loved crocheting, knitting and quilting. She enjoyed crocheting dish cloths and prayer cross bookmarks for Christmas gifts. With every quilt she made, she made with love; it felt as if she was giving a hug to whoever received the quilt. A Christmas tradition for Jeanette was making her homemade fudge, a memory her family will cherish. She was also an avid reader.

In addition to her husband Donald, Jeanette is survived by two daughters and their husbands, Marilyn and Jim Lewis of North Carolina, Brenda and Will Gaines of Louisville, one grandson, Dr. Robert "Robby" Lewis and one great granddaughter, Meyer Madigan Lewis.

Jeanette was preceded in death by all her siblings.

Pallbearers will be Jim Lewis, Will Gaines, Bernard and Greg Montgomery and Bryan and Kurt Abbott.