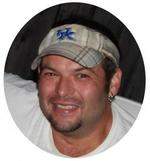 James Brandon Cloyd, 39, of Junction City, died Wednesday September 7, 2016. Born December 28, 1976, in Boyle County, he was the son of James William and Linda Renner Cloyd. Brandon was a 1995 graduate of Boyle County High School where he played football. He loved archery, fishing, hunting, and backroading with his wife. Brandon enjoyed UK basketball, NFL, and NBA games. He also loved his dogs. Brandon is preceded in death by his grandparents, Robert and Helen Cloyd, Oather and Marie Renner of Stanford and a special cousin Jason Giles Antle.

In addition to his parents Brandon is survived by his wife, Stephanie McGrath Cloyd, a son, Timothy Cloyd of Danville, a step son, Tre McGrath of Harrodsburg, a brother, Micah Cloyd of Junction City, two nieces, Meyah and Megan Cloyd and several aunts, uncles, and cousins.