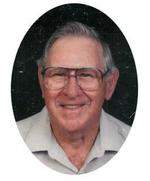 James William Boyd, 95, of Stanford, died Monday August 8, 2016. Born December 18, 1920, in Lincoln County, he was the son of the late Alfred and Mamie Kelley Boyd. James served his country in the United States Army during World War II. In addition to his parents James was preceded in death by 2 brothers, 2 sisters, and a granddaughter.

The funeral will be at 11 a.m., Monday August 15, 2016 at Stith Funeral Home, Danville with Rev. Brad King officiating. Burial will be in Danville Memorial Gardens. Visitation will be after 5 p.m., Sunday August 14, 2016 at Stith Funeral Home, Danville. Pallbearers will be Stephen Boyd, Donnie Boyd, David Boyd, Jerry Boyd, Larry Boyd, and Terry Boyd. Memorial donations are suggested to the charity of your choice.