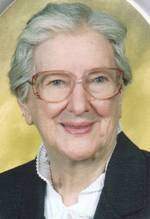 Ida Mae Wyler Gover, 95, of Stanford, KY passed away on Sunday, March 31, 2013 at Ephraim McDowell Regional Medical Center in Danville, KY. She was born November 27, 1917 in Crab Orchard, KY to the late Chris and Mathilda Ladamann Wyler. She was the widow of the late Walter J. Gover, the retired owner of Severance's Store in Stanford, KY, and was a member of Stanford Christian Church.


Visitation will be Monday, April 1, 2013 from 5-9pm. Funeral service will be Tuesday, April 2, 2013 at 1pm with Reverends Mark Thompson and Jim Baughman officiating. Both services will be held at Spurlin Funeral Home in Stanford, KY. Casket Bearers will be: Chucky Poynter, Justin Poynter, Michael Poynter, Ryan Kirkpatrick, Greg Lakes, Chase Kirkpatrick, and Leanne Kirkpatrick. Honorary Bearers will be her nieces and nephews. Memorials in lieu of flowers can be given to Stanford Christian Church (200 E. Main St. Stanford, KY 40484).