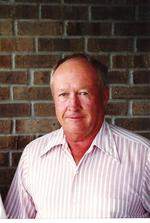 Harold Glenn Million, 83, of Springfield, died Wednesday, January 16, 2013. Born Oct. 14, 1929 in Lexington, he was the son of Ernest Morton and Ethel Gardner Million. Harold was a lifelong farmer, cattleman and horse trader. He served in the US. Army in Germany following WWII. He is a member of the Lebanon Congregation, Jehovah's Witnesses. Harold was skilled at choosing dairy cattle, both Holstein and Brown Swiss and beef cattle. He was also a fisherman.