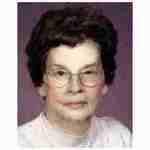 DANVILLE- Gussie Mae Grubbs, age 86 passed away on Sunday, January 8, 2012 after a lengthy illness. She was born in Boyle, Co., KY to the late Cleveland and Lula Routt House.

Mrs. Grubbs was a seamstress and retired from Genesco after 21 years.

Funeral services will be held at 6:00 PM on Thursday, January 12, 2012, at Preston-Pruitt Funeral Home with Pastor Travis Altop officiating. Visitation will be held from 4:00 PM until service time. A private family burial will follow at a later date in Danville Memorial Gardens.