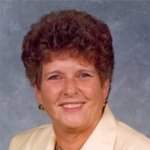 Ethel P. Payne, 77, of Shepherdsville returned to her Heavenly Father Friday, August 2, 2013.
Mrs. Payne was born August 7, 1935 in Danville, KY to the late Lumby and Faye Nevius Gordon and was retired from Brown and Williamson.
Among those who preceded her in death include her parents; sisters, Ervie Gordon, Hazel Fuell, Maryosa Gordon and Ruth Cook and brothers, Robert and Ester Gordon.
She leaves to cherish her memory, her husband, Raymond Payne; sons, Michael R. Payne (Kris) and David Payne (Valerie); grandchildren, Bradley Payne, Kristi Marksberry Crissi and Kayla Payne; two great grandchildren and a host of other family and friends.
Friends may pay their respects on Monday from 2:00 pm until 8:00 pm at Schoppenhorst Underwood and Brooks Funeral Home (Preston Hwy at Brooks Rd.).
Funeral service will be held at 1:00 pm on Tuesday at Preston and Pruitt Funeral Home with burial in Danville Memorial Gardens. Visitation on Tuesday will be held from 10:00 am until the time of service at Preston and Pruitt Funeral Home.