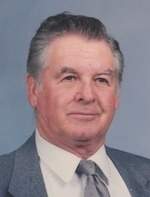 Edward Ballard Jr.,86, of Paint Lick KY, passed away Monday, June 29, 2015 at his home in Paint Lick. He is survived by his loving wife of 65 years, Barbara Ballard. He was born June 29, 1929 in Garrard County to the late Ed Ballard Sr. and Ada Sparks Ballard. Edward was a dairy farmer for most of his life and a member of Mt. Tabor Baptist Church. Along with serving in the U.S Marine Corps. Edward was a man of many traits, loved to be outside mowing his lawn and spending time with his family.

Memorial contributions are preferred to Hospice of Danville.