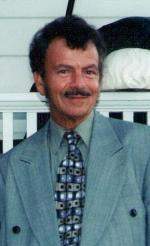 David Gene York, 62, of Stanford, KY passed away Saturday, August 22, 2015 at home. Born December 12, 1952 in Indianapolis, IN, he was the son of the late Ernest and Gladys Mae Johnson York. He worked as a printer for most of his life, was a former volunteer auxiliary policeman for the city of Crab Orchard, a former Crab Orchard City Commissioner, and was the lead vocalist and guitar player for the "Country Swingers Band". He was also a member of Crab Orchard Baptist Church.