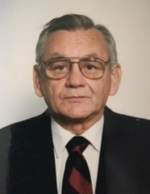 Cyril John Baranowski, 92, of Indian Trail ,North Carolina, formerly of Danville, passed away Wednesday, October 18, 2017 at Hospice of Union County in North Carolina. Born on February 5, 1925 to the late John R. and Julia Baranowski in Chicago, Illinois. After high school graduation, he was drafted into the US Army and served three years during WWII.

After returning home, Cyril attended Centre College in Danville, Kentucky where he participated in sports and was a member of Sigma Chi Fraternity. After graduation, he met and married Corrine Preston of Junction City, Kentucky and moved to Downers Grove, Illinois. Cyril became a Deacon at their Presbyterian Church in Downers Grove. In Indian Trail, Cyril became a member of The Veterans of Foreign War and American Legion.

He was preceded in death by his older brother, Clement Baranowski and a younger sister, Colette Baranowski of Downers Grove. He is survived by his wife, Corrine; son, Craig J. (Michele) Baranowski; a daughter, Caryn J. (Eddy) Pukalski; and two granddaughters, Olivia and Juliana Baranowski.

Funeral services will be 11AM Friday, October 27, 2017 at Preston Pruitt Spurlin Funeral Home. Burial will be in Danville Memorial Gardens. Visitation will be Thursday, October 26, 2017 from 6-8 PM.

Memorial contributions can be made to Hospice of Union County 700 W. Roosevelt Blvd. Monroe, NC 28110.