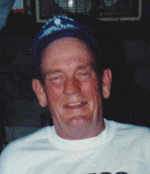 Carl was former owner and operator of Baker Auto Sales, a retired heavy equipment operator for Edwards and Webb Construction, a former police chief in Perryville and a former volunteer fireman in Perryville.
Carl loved fishing with his son Robert, hunting and gardening. His children fondly remember him as a great father and family man; they have many memories to cherish.
Carl was a fun-loving kind-a-guy. He loved to have a good time!
In addition to his wife, Ruby, he is survived by two daughters, Rena (Ron) Crepps of Lexington and Judy (Ray) Hoskins of Stinnett; three sons, Carl Lee Baker of Danville, Kenny (Kelli) Baker of Burgin and Robert (Susan) Baker of Danville; one brother, Forrest (Frances) Baker of Atlanta, Ga.; four grandchildren, Justin (Michelle) Hoskins, Johnny Allen, Michael (Karen) Carey and Cassie Baker; and four great-grandchildren, Michael and Zach Cummins and Faith and Ruby Hoskins. He is also survived by the mother of his children, Virginia Godbey.
He was preceded in death by one brother, Charlie Baker; and one sister, Lillian Padgett.
Funeral services will be 1:30 p.m. Monday, April 11, 2011, at Wilder Funeral Home by Bobby Lakes, with burial in Danville Memorial Gardens.
Visiting hours are 3-6 p.m. today at the funeral home and after 8 a.m. Monday until time of service at the funeral home.
Active pallbearers will be Justin Hoskins, Kenny and Robert Baker, John Allen, James Morgan and Timmy Vinyard.
Honorary pallbearers will be Michael Carey, Ron Crepps and Ray Bowling.
Expressions of sympathy are suggested to the American Cancer Society and Heritage Hospice.