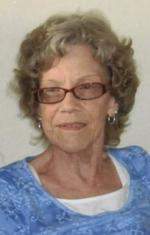 Bonnie Carol McCowan Hartman, 76, of Louisville, formerly of Danville, passed away Friday, February 24, 2017 in Louisville. She was preceded in death by her husband, Clarence Hartman, Jr.

Carol worked in healthcare for many years and was a member of Parksville Baptist Church.

Funeral services will be 7:00 PM Tuesday, February 28, 2017 at Third Avenue Baptist Church in Louisville, KY with Rev. Ben Birkholz officiating . Visitation will be 5:00 PM until service time at the church.