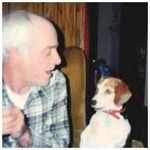 DANVILLE: Bennie C. Duck, 71, of Danville passed away Friday, September 2, 2011 at Ephraim McDowell Regional Medical Center. He was born January 14, 1940 in Shelby County, Alabama to the late John "Joe" Proctor and Hazel Allene Watts Atchison and was the husband of the late Doris Ann Powers Duck.

Mr. Duck served his country in the United States Navy during the Vietnam War, was retired as a self-employed painter, was an active member of the VFW Post 3634, and enjoyed reading, cooking, and fishing.

In addition to his parents and wife, Mr. Duck was preceded in death by a brother Jackie Alford Atchison, and two sisters Regina Atchison Walker, and Janet Atchison.

A Celebration of Life service will be held at 1:00P.M., Tuesday September 6, 2011 at Preston-Pruitt Funeral Home with Chaplain Dale Denton officiating. A Gathering of family and friends will begin at 12:30P.M. A committal service will follow at Danville Memorial Gardens.