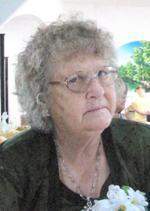 Anna L. Patterson, 73, of Stanford, KY died Friday, Feb. 28, 2014, at Eph. McDowell Hospital in Danville, KY. She was born July 7, 1940 in Jessamine County, KY to the late Jesse and Elizabeth Stinnett Bruner. She was a homemaker and was of the Baptist Faith, she enjoyed all kinds of flowers and enjoyed bird watching.


Visitation and Funeral services will be all in one day on Wednesday, March 5, 2014, with the visitation beginning at 10 am and the funeral beginning at 1 pm at Spurlin Funeral Home Stanford. Brother Ronnie Haste will be officiating the service, burial will be in Danville Memorial Gardens.


Memorials in Lieu of flowers are asked to be given to the Anna L. Patterson Memorial Fund, C/O PBK Bank, 120 Frontier Blvd, Stanford, KY 40484