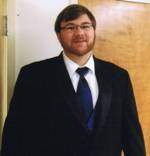 Adam Keith Maddox, 26, of Stanford, KY passed away Tuesday, June 4, 2013 in Danville, KY. He was born February 7, 1987 in Danville, KY to Adam Troy and Rita Brown Maddox. He graduated from Lincoln County High School in 2005, attended Eastern Kentucky University, and received his certification as a massage therapist from Lexington Healing Arts Academy. He enjoyed softball and basketball, was a pitcher for the Hitmen Softball Team of the Danville Industrial League, was an avid UK Basketball and Michigan Football Fan, and was a member of Stanford Baptist Church.


Survivors include his parents; Adam Troy and Rita Brown Maddox of Stanford, KY, one sister; Samantha Zinkievich (Joshua) of Omaha, NE, several aunts and uncles, and several cousins. He was preceded in death by his maternal grandparents; Charles Leon and Bessie Shelton Brown, and his paternal grandparents; Lester and Lela Singleton Maddox.


Visitation will be Thursday, June 6, 2013 from 5-9 pm. Funeral service will be Friday, June 7, 2013 at 1pm with Reverends Max Hester, Greg Hancock, and Andrew McGinnis officiating. Both services will be held at Stanford Baptist Church. Burial will be at Danville Memorial Gardens. Memorials in lieu of flowers can be given to Gideons International (P.O. Box 155, Stanford, KY 40484). Spurlin Funeral Home (Stanford) is in charge of arrangements.